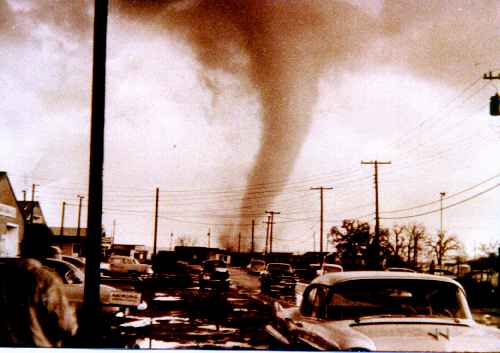 Links to Other Sites

"All photographs are accurate. None of them is the truth."   Richard Avedon

This site purposely makes little effort to describe the science -- to the extent that it is understood today -- of tornadoes, but merely to document a specific storm(1). The links and references below will lead you to sources providing good explanations of tornado and severe thunderstorm meteorology plus other useful information concerning tornadoes in general, as well as dramatic images and stories.

A big tornado projects a truly impressive menace that cannot adequately be communicated by video, film, photographs, or words. It has to be seen to be appreciated. Many tornadoes look positively alive. The difference between seeing one on film and seeing one in real life is the difference between watching a Godzilla movie and seeing some real Godzilla in real life. Nevertheless, when people ask me what the 1957 Dallas tornado looked like I tell them they should go watch the fictional one that carries Dorothy and Toto away to Oz. The physical appearances are not exactly the same, but to this day the sight of this scariest of all movie tornadoes(2) brings back memories.

(NOTE: Some of the items below have become dead links since first posted. I have removed the hyperlinks but retained the descriptive text for reference purposes.)

> National Weather Service Fort Worth Office A short commemorative piece on the tornado. As you would expect, it goes into a little bit of the meteorology. Curiously it has the incorrect 3:00 p.m. time of first appearance that turns up periodically (and that I think likely is due to the Dallas Morning News's error-filled 1997 anniversary story).

> Videos A youtube video with quite a bit of footage. The quality is poor, probably because the source material the video-maker used was poor. Interesting enough, though.
An NBC 5 News (Fort Worth) presentation marking the 61st anniversary of the tornado in April of 2018. You will have to un-mute the audio. (This link may not stay live for long.)

> Recent DMN Web Pages An April 2017 60th anniversary page from the Dallas Morning News, with a number of photographs from the Dallas Public Library archive, including one of the damage to the Johnson & Johnson plant on Denton Dr.
A couple more photos on this page (the “Read more here” link likely will not work).

> The Dallas Observer An April, 2017 story from Dallas's alternative newspaper containing a selection of photographs credited to the Dallas Firefighters Museum. The view from Live Oak St. at the top of the story shows the Republic National Bank Building with its distinctive spire.

> Chasing the Storm: Weather Photography Thanks to Matty from Brooke's elementary school class in Delaware for the link to this interesting weather photography site.

> SafeStars Tornado Safety and Preparedness Thanks to Mary's student Michael for the link to this site with tornado information and safety tips for kids and teens.

> Emergency Essentials: A Kid's Guide to Tornadoes Thanks to Kelly and mom Abby, and to Kaylin and her daughter for this link to another site with information and safety tips for kids.

> Wikipedia has an entry for the "April 2, 1957 Dallas tornado outbreak," which it presents as a two-day extravaganza of tornado activity spanning 8 states. And check the link under "see also" for what appears to be an exhaustive list of North American tornado outbreaks.

> American Meteorological Society's "Journals Online" Here are references for a couple of papers illustrating the scientific use to which data from the tornado was put:
Wind Speed and Air Flow Patterns in the Dallas Tornado April 2, 1957 - Walter Hoecker, Jr. - August 1960
Three-Dimensional Pressure Pattern of the Dallas Tornado And Some Resultant Implications - Walter Hoecker, Jr. - December 1961.
To access the papers, go to the site (will open in a new window). Select "Advanced Search," enter "Hoecker" for "Author Last Name" and "1957 Dallas Tornado" for "Anywhere in Article" (minus the quotes), and click "Submit Search." PDFs of the complete papers can be accessed from the search results. Even if you find the meteorology daunting, you should at least scroll to the "Concluding Remarks" sections of each paper for expert testimony as to the importance of the 1957 Dallas tornado for tornado research.

> Texas Tech's WISE Research Lab The following are references with dates for some technical descriptions of the tornado for which, unfortunately, I do not have the sources. This information is from Texas Tech's Wind Science and Engineering Lab' (now apparently called the “National Wind Institute”), which probably has copies of the reports.
Dallas Tornado - Malcolm Harrison - April 1957
Tornado: State of Knowledge - Edwin Kessler - April 1977

> An Engineering Assessment of Structural Damage in the Altus, OK Tornado: May 11 1982 - Timothy P. Marshall and James R. McDonald  - October 1983. Publications that are on the WISE lab's site include a PDF of this paper which, although  describing a tornado in Oklahoma, notes the significance of the 1957 Dallas tornado as science's first good opportunity for studying tornado damage to varying types of construction (try going to the WISE lab's site noted above and doing a search for "Altus").

> The Dallas Public Library's Texas/Dallas History and Archives section has the complete Weather Bureau report containing the Hoecker references above:
The tornadoes at Dallas, Tex., April 2, 1957 / a collection of reports by Walter H. Hoecker, Jr., et al. - iii, 175 pp. : maps, charts. Holdings: Item Holdings DPL Catalogue Call Number: 551.553 U58Wt. Publisher: Washington : U.S. Department of Commerce, Weather Bureau, 1960. This is one of the richest sources of material on the tornado, although even it seems not to be entirely accurate. Don't accept the library's (very bad) photocopy; make them bring you the original. I get the impression that copies of this report are in pretty short supply.

> The report, mentioned elsewhere on this site, resulting from a U.S. Weather Bureau study of the tornado and its effects that was led by meteorologist Robert G. Beebe is included in the above DPL reference.

> On Tornado Funnels A 1978 scientific paper which suggests a modeling strategy for tornado funnels based partly on observations of the 1957 Dallas tornado, might provide interesting reading for anyone possessing a degree in meteorology.


(1) For the meteorologically inclined, a quick summary. Obviously there was way more than adequate atmospheric moisture on (and before) April 2, apparently including an impressive surface dew point rise from 60 degrees to 70 degrees between 12:30 and 3:30 p.m. on the day of the tornado. The day was warm, even by April in North Central Texas standards. The cloud base where the tornado first formed was estimated at ~1100ft. The Lifted Index seems to have been around -7. At the 500mb level (~18,000 ft) winds of about 40mph were blowing from the south. Thus moisture, instability, and significant shear all likely were in place. In addition, a cold front was advancing from the northwest and was near the area, a stationary front ran along an east-west line virtually on top of the area (all of the 25 tornadoes in this outbreak occurred north of it -- the most severe ones virtually on it), and the typical dry line seems to have been set up out to the west; so a convergence of boundaries was present to help concentrate the other factors. On a more "macro-meteorological" scale, a big upper level low was sitting over New Mexico, the jet stream was split pretty much north and south of the continental U.S., and a series of low level short wave troughs had been moving across the country for a number of days. Radar data for the tornado can be found in the Weather Bureau report, although I don't know how much help 1957 weather radar info might be in filling out the picture.

(2) Actually a thirty foot long cylinder of muslin run along slots cut in the top and bottom of the set, plus a lot of dust stirred up by fans.